I thought I would share about another cool butterfly visit for the family. I had my friend Sandee bring me a beautiful canvas of a butterfly on Thursday because of the prior post and encounter by our Elijah butterfly. I hung it so everyone could see it and each one of the kids recognized immediately the symbol of this canvas and asked where it came from. I told each one and they all smiled and had a moment to think about their baby brother. I have taken Stella to look at the canvas several times and each time tell her about her strong brother. It is now a picture everyone can look at and feel their brothers presences in their life. 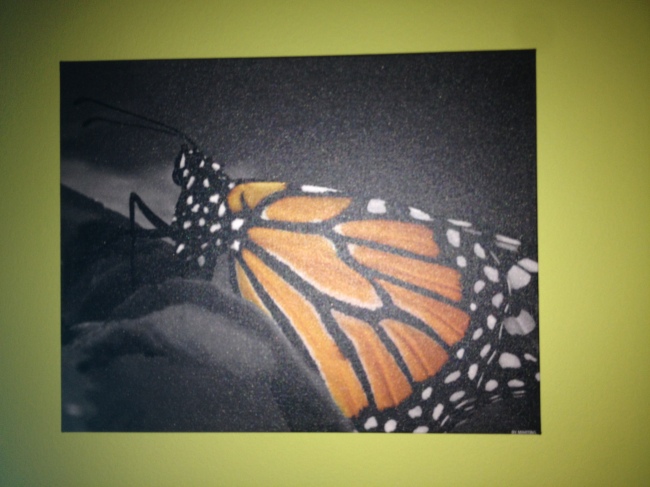 Fast forward three days it is Carter’s football game and the sun is shining. Lexi is sitting between Ron and I in the stands with her arms looped through each of our arms. Paige and Ryan are playing and Mary Jo is walking Stella. Carter makes a GIANT tackle on the side closest to us. It’s the kind of tackle that he plants his feet and takes all his strength (because the other kid is at least a foot taller and has 25 pounds on him) he then grabs hold and turns the other boy across his body and throws him to the ground. If anyone knows me at Carter’s game I am the proud mom. Cheering on the entire team making sure I know the roster so I can let them know I see how they are all playing so well. When Carter makes a play he listens for me in the stands to make sure I saw, this tackle was so great he knew everyone saw the crowd erupted and his name was called by many. As I sat back down after yelling “way to go C” Lexi grabbed my arm again and pointed above us. There it was a beautiful monarch butterfly right over us. How she spotted it I have no idea but it was there and it went right out and flew over Carter on the field, It was magic. Lexi, Ron and I witnessed this beautiful magical moment and I knew Elijah was still watching over us.

I told Carter yesterday about what we saw after he made that tackle and he said “E”! I said yes.

2 responses to “Another Visit”